Worldwide the effects of settler colonialism continue to be evident in reproductive discourses, practices, policies and laws that inflict violence on the bodies of indigenous peoples, people of color, and others who are deemed to fail to meet the oppressive ideal of the neo-liberal reproductive body. In addition to causing severe harm to vulnerable people, oppressive reproductive practices such as forced sterilization, denial of safe abortion, and environmental racism are ongoing effects of settler colonialism and colonial governance help sustain colonial structures and relations of power. Drawing on the intersectional framework of the global Reproductive Justice movement, this conference examines the continuities of colonial reproductive violence in the contemporary settler colonial state. Speakers will address aspects of reproductive injustice in Bolivia, Canada, Peru, South Africa, the United Kingdom and the United States.

This conference is sponsored by The Penn State Humanities Institute, Rock Ethics Institute, the Department of Women’s, Gender and Sexuality Studies (WGSS), the African Feminist Initiative (AFI), the Brill Professorship, and the Center for Global Studies (CGS). 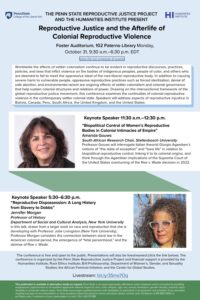 Professor Gouws will interrogate Italian theorist Giorgio Agamben’s Agamben’s notions of “the state of exception” and “bare life” in relation to biopolitical reproductive control, linking it to its colonial origins, and think through the Agambian implications of the Supreme Court of the USA’s overturning of the Roe v Wade decision in 2022.

In this talk, drawn from a larger work on race and reproduction that she is developing with Prof. Julie Livingston (New York University), Professor Morgan considers the connection between slave law in the American colonial period, the emergence of “fetal personhood,” and the demise of Roe v. Wade.

Collecting the Andes: Museums of Andean Art and Science in the Americas and Atlantic World

This three-day symposium brings together scholars and practitioners of art history, history, anthropology, archaeology, and museum design, from Argentina, Bolivia, Ecuador, Peru, and the United States to discuss the collection of Inca and Andean aesthetics, sciences, and natures in the Americas and Atlantic World, from the 1530s to the present. Its wide scope reflects its subject: the forms of Inca and Andean knowing and seeing whose colonial and post-colonial disruption, collection, and recreation shaped imperial and republican museums of anthropology, art, and natural history worldwide, as well as artistic and intellectual responses to colonialism in the Andes. This symposium helps shape a 2024 exhibit in the new Palmer Art Museum.

Visit the Conference Website to see the full schedule and learn more about this event.

This conference is sponsored by the Humanities in the World Initiative Faculty Invites program, and is co-sponsored by Department of History, Latin American Studies Program, and the Committee for Early Modern Studies. 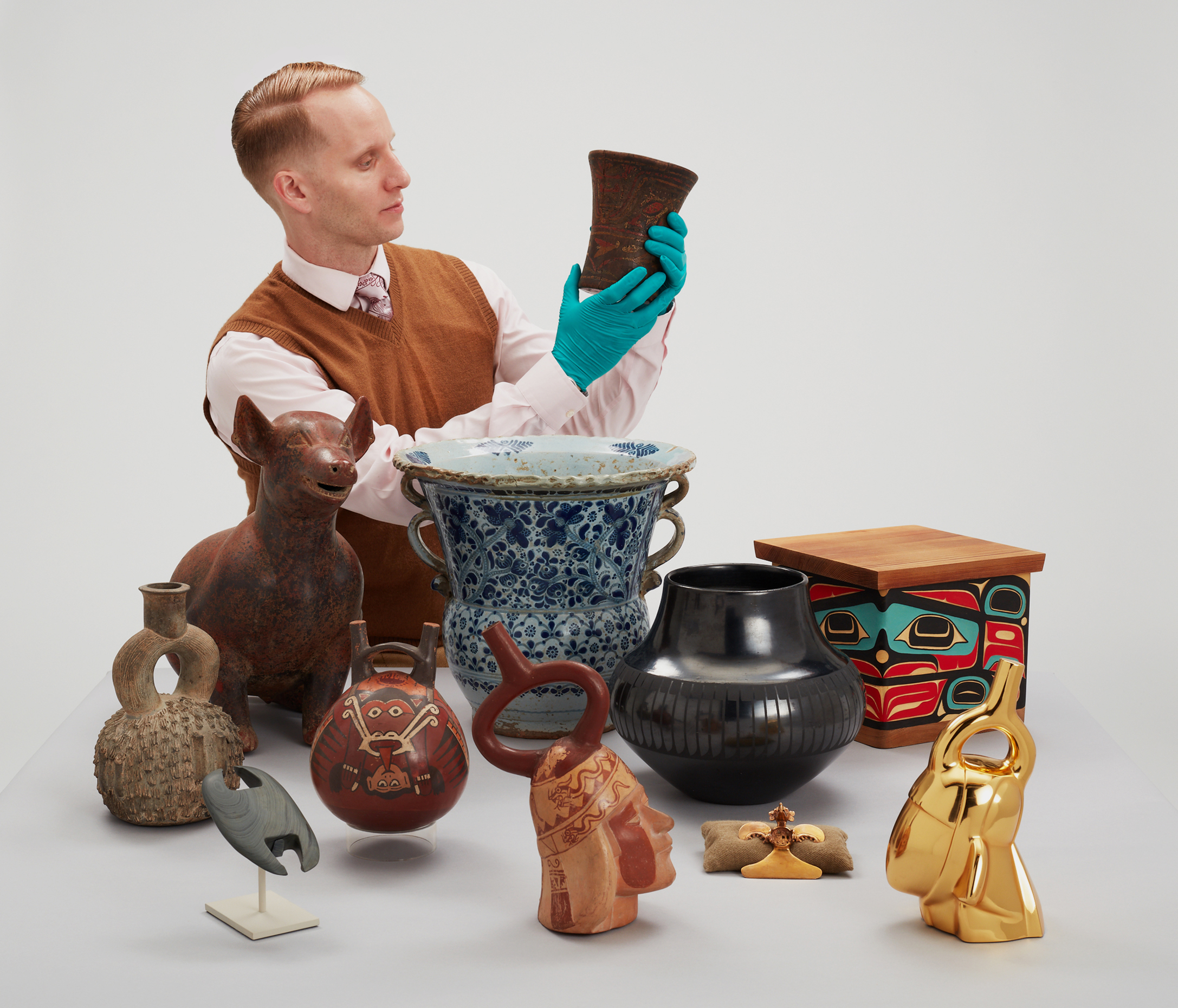 An intricately patterned tunic in the collection of the Dumbarton Oaks Museum is the most famous work of Andean art in the world. However, little has been known of its life before it was acquired by Robert Woods Bliss, the founder of Dumbarton Oaks, in the 1950s. This talk explores how the 500-year-old tunic, originally destined for the wardrobe of an Inca emperor, may have journeyed to the walls of a museum. At the same time, it considers the consequences of its transformation as an object—from regalia, to heirloom, to art—for those who have cared for and about it. “In search of an aesthetic I can call my own” with Kukuli Velarde. Friday, November 4, 12:00-1:30pm. Pasquerilla Spiritual Center, 130 Garden Room

Kukuli Velarde is a Peruvian artist based in the United States since 1987. Her practice revolves around the consequences of colonization, reclaiming a gaze both synchronous to our time yet rooted in pre-columbian and colonial sensibilities. She has received awards and grants such as the Guggenheim Fellowship (New York- 2015), the United States Artists-Knight fellowship (California- 2009), the Pew Fellowship in Visual Arts (Pennsylvania- 2003), the Anonymous is a Woman award (New York- 2000), the Joan Mitchell Foundation grant (New York- 1997), among others. In 2013 her project CORPUS got the Grand Prize at the Gyeonggi Ceramics Biennial in South Korea. She participated as faculty at the Skowhegan School of Painting and Sculpture in 2022. 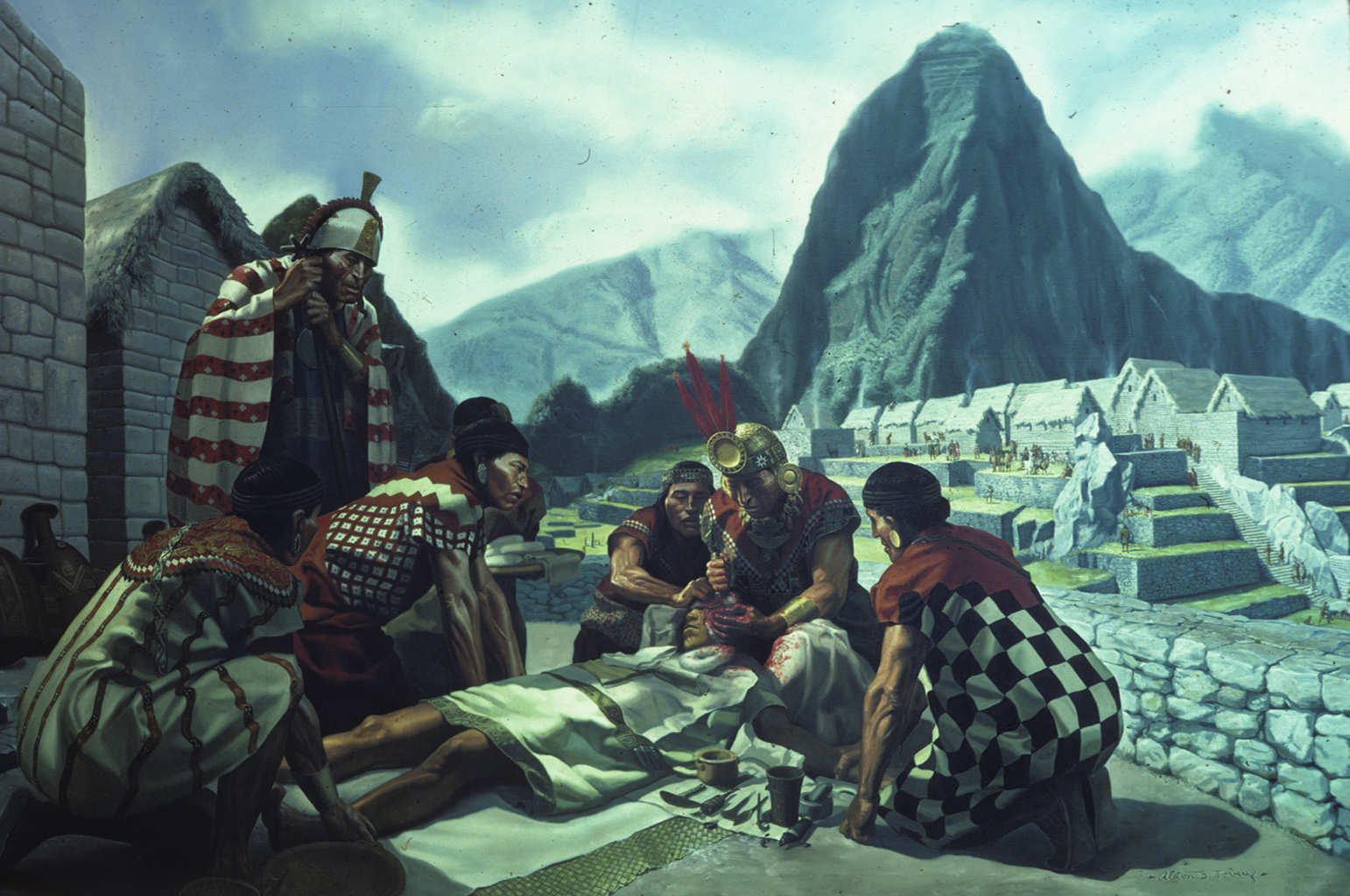 Beginning in the nineteenth century, Peruvian, European and North American explorers and archaeologists collected human remains from burial caves in the highlands and cemeteries on the desert coast of the Andes. In Peru, collectors found skulls showing evidence of trepanation (skull surgery) in pre-Hispanic burial houses and caves. These medical practices were brought to world-wide attention by archaeologists like Julio Tello, a descendent of those medical ancestors in the central highlands, who devoted the rest of his life to excavating archaeological sites and building museum collections of ancestral mummies and skulls. This talk will look at how the study of human remains played an important role in documenting health conditions and medical practices in the pre-Hispanic Andes, and how these studies continue to flourish today through the work of a new generation of young bioarchaeologists.

Intellectuals and decolonization in Palestine/Israel